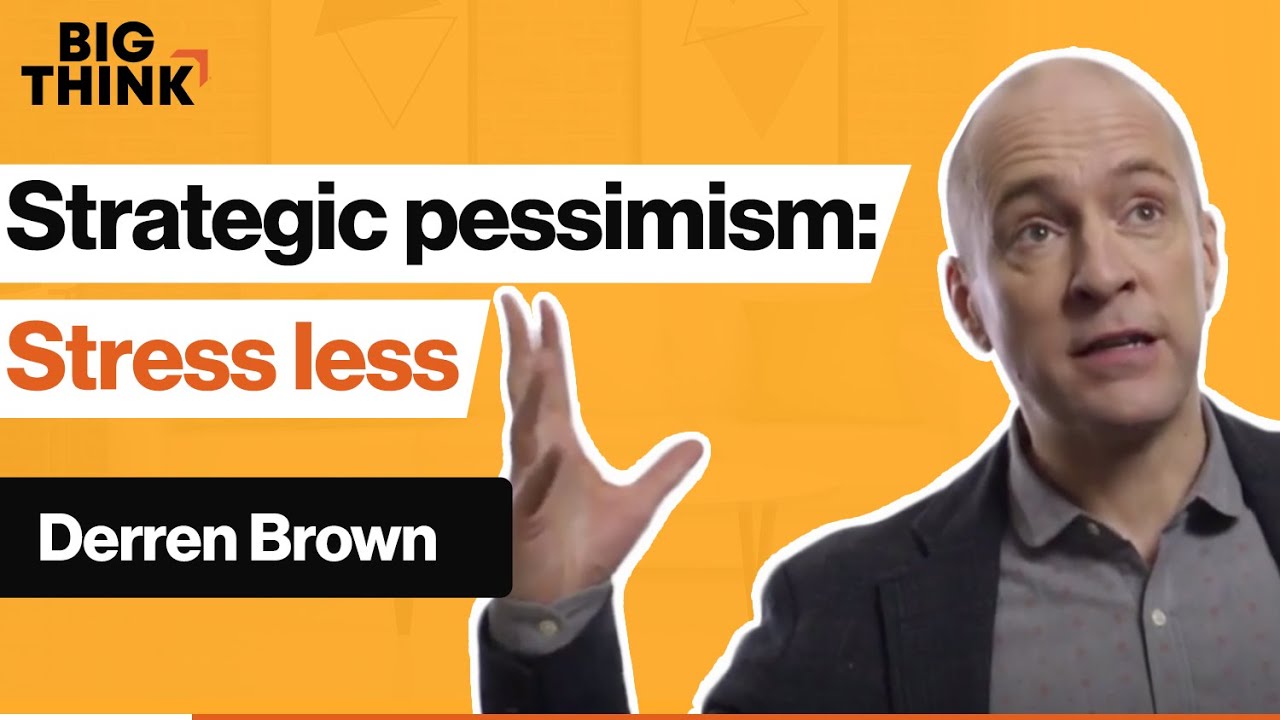 The two main ideas of stoic happiness are that problems are caused by your reactions to events not the events themselves, and the only things you can control are your thoughts and your actions.

Choosing strategic pessimism over optimism and positive thinking is one way to avoid “unnecessary disturbance and anxiety.”
——————————————————
DERREN BROWN

Derren Brown began his UK television career in December 2000 with a series of specials called Mind Control. In the UK, his name is now pretty much synonymous with the art of psychological manipulation. Amongst a varied and notorious TV career, Derren has played Russian Roulette live, convinced middle-managers to commit armed robbery, led the nation in a séance, stuck viewers at home to their sofas, successfully predicted the National Lottery, motivated a shy man to land a packed passenger plane at 30,000 feet, hypnotised a man to assassinate Stephen Fry, and created a zombie apocalypse for an unsuspecting participant after seemingly ending the world. He has also written several best-selling books and has toured with eight sell-out one-man stage shows.
———————————————————————————-
TRANSCRIPT:

So, I became interested in stoicism over the last few years I wrote a book called Happy, which was delving into stoicism. Stoicism was the dominant school of philosophy for 500 years before Christianity took over, so when it did it was the stoics they had to win round. And because of that they incorporated and appealed to a lot of stoic ideas so for that reason they still sound familiar to us nowadays. But when you look into them with the rigor that they were looked into 2000 years ago they provide I think a very useful and realistic as in really grounded in reality approach to happiness. What stoicism says there’s sort of a couple of big building blocks. One is a familiar idea to us still that it isn’t events in the world that caused our problems but is our reactions to those events, the stories we form about them, our judgments about those events that’s where our problems come from.

And we know that to be true because if something is really upsetting us we can always imagine someone we know who would react to that thing differently and as long as we can always do that that’s like a big clue that it’s our reaction that’s causing the problem not the thing itself. Once you’ve got your head around that the other big building block of it is, and I think this is where it’s supremely useful, is that we can only control certain things in life. If we try and control things we can’t we are going to frustrate ourselves and become anxious. The old idea of happiness that the stoic sort of enjoyed was that happiness was a sort of tranquility so this is really all about a recipe for avoiding unnecessary disturbance and anxiety so you don’t try and control things that you can’t. Now, the only things you can control are your thoughts and your actions and that is it. That’s it. And if you accept the idea that everything outside of your thoughts and actions are fine, they’re fine as they are and you let that idea really sort of drip into your soul then you have a very good template for avoiding unnecessary disturbance and anxiety.

There are gray areas that immediately pop up like what about social injustice what if you really want to change the world? That’s outside of my thoughts and actions, but it sort of isn’t. What is outside of your thoughts and actions is an outcome that you can’t control, but what is still within your thoughts and your actions is how much effort you put into changing the world so you can still spend your life trying to create change but your impetus is to do the very best that you can, the best that you can do, but you’re not committing yourself to an outcome that is out of your control. And then, of course, you avoid, you just do a better job because you’re not getting caught up in bitterness and frustration and anxiety. It’s like if you were playing a game of tennis, if you’re trying to win well you’re going to get anxious that the other person is beating you, whereas if you’re playing from a point of I’ll play as well as I possibly can you’re more likely to succeed and become less anxious you’re going to play a better game and a tennis player will tell you that that’s true. So, those are very helpful things and I find that notion of which side of the line is this thing that’s upsetting me? Read the full transcript here: https://bigthink.com/videos/the-path-to-less-stress-strategic-pessimism.

Does mankind have an overarching purpose?
How can we make the change? | Angela Asomah & Lea Dehning | TEDxBonn
Measuring Coastline – Numberphile
Paleontology’s Technicolor Moment
We’re Oversalting Our Food, And It’s Not What You Think