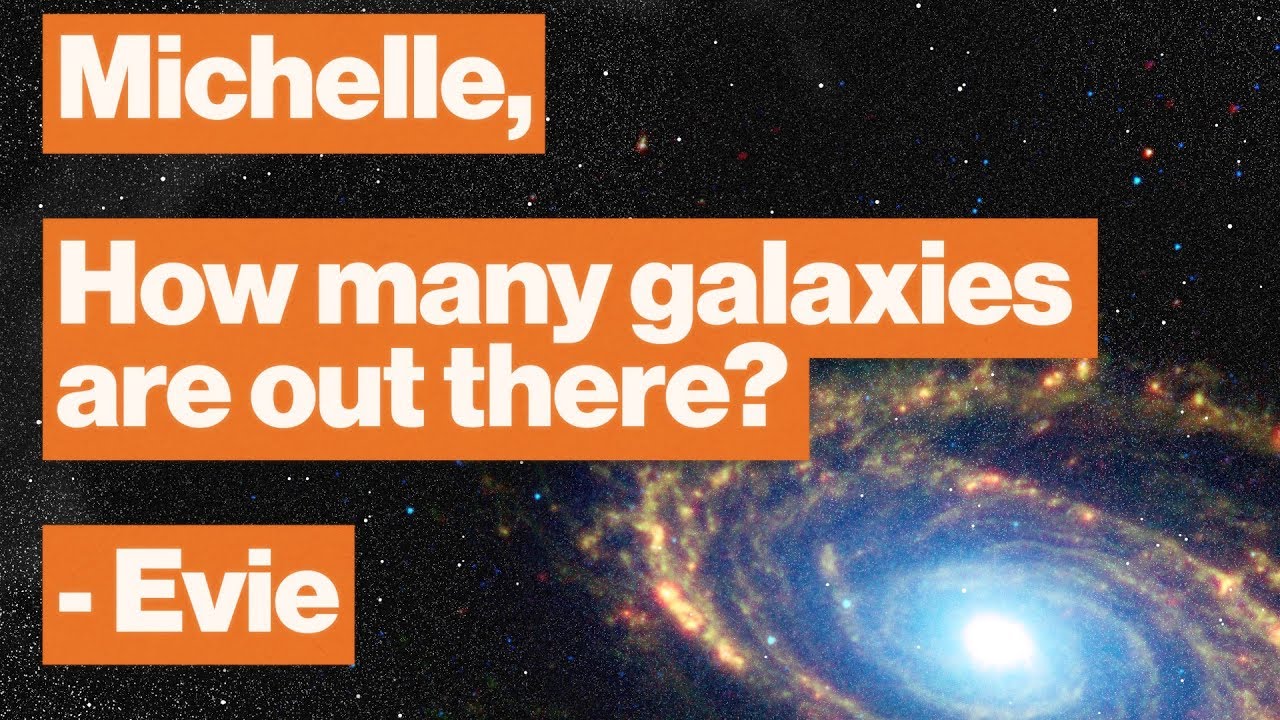 Dr. Michelle Thaller is an astronomer who studies binary stars and the life cycles of stars. She is Assistant Director of Science Communication at NASA. She went to college at Harvard University, completed a post-doctoral research fellowship at the California Institute of Technology (Caltech) in Pasadena, Calif. then started working for the Jet Propulsion Laboratory’s (JPL) Spitzer Space Telescope. After a hugely successful mission, she moved on to NASA’s Goddard Space Flight Center (GSFC), in the Washington D.C. area. In her off-hours often puts on about 30lbs of Elizabethan garb and performs intricate Renaissance dances. For more information, visit NASA.
———————————————————————————-
TRANSCRIPT:

MICHELLE THALLER: Evie, you ask a wonderful question: how many galaxies are there?

And this is something that we actually don’t know the answer to, but I can tell you a wonderful story about what we do know.

So let me first talk about what a galaxy is. And a galaxy is a family of stars, but usually in the hundreds of billions of stars. We live in a galaxy called the Milky Way and there are about 500 billion stars, we think, in the Milky Way Galaxy. Galaxies are absolutely huge.

The Milky Way Galaxy is about 100,000 light-years across, and that’s not really a number I can get my mind around, seeing as one light-year is about six trillion miles, so our single galaxy is 100,000-times-six-trillion miles across. It’s absolutely huge.

The best analogy I know is that if you think about the sun—the sun is a giant thing, the sun is so big you can fit a million Earths inside it. It’s really, really big. And if we made the sun the size of a dot of an “i”, so pretend that the sun is only the size of—like take a regular page of a book, look at the dot of an “i”, if the sun were that big, how big would our one Milky Way Galaxy be? It would be about the size of the earth. So that’s how big a single galaxy is.

If the sun were the dot of an “i”, the Milky Way galaxy would be roughly the size of our planet.

Now how many galaxies do we know of?

And this is a wonderful result from the Hubble Space Telescope. The Hubble Space Telescope decided to try to answer that question, and what it did is it looked at an area of the sky that, as far as we knew, was blank, it was just black; we couldn’t see many stars there, we didn’t see any galaxies there, and it decided to take a very, very deep distant look at the universe.

Now, the way the Hubble Space Telescope (and any camera) works is it works kind of like a “light bucket.” You can actually open up the eyes of the telescope and tell it to just keep staring, and the longer it stares the fainter and more distant objects you can see.

For those of you that like photography, it’s called doing a time exposure. You leave your camera open for a certain amount of time and you can see fainter and fainter things.

Well, incredibly, the Hubble Space Telescope kept its eyes open on this one little part in the sky for more than a month, and it just let any light come and build up this beautiful image, and what we discovered is that in this empty part of the sky—empty we say!—we counted over 5000 galaxies. Five thousand galaxies we didn’t even know were there. They were just so faint we’d never seen them before.

When we finally had a sensitive enough telescope up in space and we were able to keep it staring at a tiny little part of the sky for a month 5000 galaxies turned out to be hiding there that we’d never seen.

So, how much of the sky was this tiny little part that the Hubble Space Telescope looked at?

Read the full transcript at https://bigthink.com/videos/ask-a-nasa-astronomer-how-many-galaxies-are-out-there-2